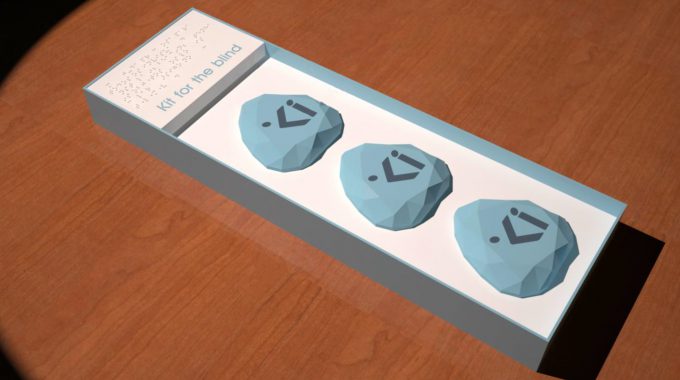 IKI Technologies’ mission is to support people with visual difficulties in their daily lives through the use of new technologies. In 2020, this company will invest in the internationalization of the myEyes product and develop a new equipment for the final consumer, the Kit for the Blind, which aims to increase the autonomy of visually impaired people.

IKI Technologies is a technology company that was born from the identification of a problem: people with visual difficulties are unable to live independently, despite all the technology available today. Thus, the myEyes® product was created, which aims to identify areas adapted for people with vision problems. It is a pioneering system through which the mobile phone speaks in a loud voice whenever it encounters an “event”, that is, a GPS coordinate or a Beacon, reproducing the texts previously inserted in a robust system existing in the Cloud.

In December 2019, the myEyes project won an Honorable Mention from the Eng. Jaime Filipe Technological Innovation Award, an annual prize that aims to promote the invention of equipment, instruments, utensils and technologies that promote the autonomy of people with disabilities in their daily life actions, both personal and social, that stimulate and extend their physical, cognitive and social capacities, and contribute to a better quality of life.

It also received the final prize of the Protechting 4.0 contest, an open innovation program designed to connect the main startups in the areas of insurtech, fintech and healthtech to large successful companies, such as Fosun, Fidelidade or Hospital da Luz Learning Health. This project was one of the 11 finalists, and one of the 3 Portuguese companies in the final phase, for a total of 392 participating projects. The final prize is the implementation of a Pilot, at Luz Saúde in Carnide.

This Pilot will be one of the focuses of IKI Technologies in the first quarter of 2020, which aims to connect the metro from Colombo to the Emergency Department of Hospital da Luz. In a second phase, myEyes will also indicate where the Ophthalmology service is located and can map other areas of the Hospital. “At Hospital da Luz we would like to measure the real impact of our product. We want to know, with blind people who frequent the space, whether access has improved or not, and we will measure these KPIs to understand the impact ”, explains Filipe Silva, founder and CEO of myEyes.

Another project that will gain some more dimension in the coming months will be the mapping of the surrounding area of ​​the Royal National Institute for Blind People (RNIB), in London. “We made a presentation to the people responsible for the institution, which is 150 years old and works in the area of ​​support for people with some visual impairment or blindness, and they really liked our solution. Above all, they posed a series of challenges for us to know if our proposal was going to meet real needs and we explained how we were working and how we developed the technology ”, reveals Filipe.

In a first phase, this project will connect the train station of St. Pancras and King’s Cross, which are only a few blocks away, and map the area surrounding the RNIB itself for those who go there. In a second phase, the objective will be to place some beacons on the buses that help people with visual difficulties to arrive at this institution. If all goes well, the final project will be to transform a small town in the UK to be completely compatible with blind people.

Still in London, IKI Technologies will support the Victoria and Alberto Museum in the preparation of an exhibition for the blind, with several pieces that can be touched and thus appreciated by people with visual difficulties. This is a Museum with about 12 kilometers of galleries, one of the largest in the world, and which does not contain a single theme, but a set of more than 4.5 million pieces of different styles and characteristics.

Autonomy for the blind

However, IKI Tecnologies main focus for 2020 will be the development of a product for the final consumer: the Kit for the Blind. It is a box with 3 beacons and the mobile application, which has a more simplified mode of operation and allows an autonomous programming of the location and message to be transmitted.

“It is like a cane that is very enlarged, which will give a lot of freedom to the blind and make a brutal difference in their day-to-day”, says the CEO of the company. The objective will be for the blind person to place the 3 beacons in different locations in their home or work space, with voice messages that may vary, so that they can orient themselves.

At home, for example, you can put a beacon in the fridge and the message indicates what you have to eat, or put another beacon in the closet that indicates where the ties are. “We think this is going to be a product that can be sold worldwide,” he concludes.

Inclusion is the main goal

“Right now, inclusion is on the table at all levels, inclusion and sustainability. On the other hand, we are living longer, but we are starting to have cataracts and other problems and we are not being inclusive enough ”, says Filipe. This concern motivated the creation of a partnership with Accessible Portugal that aims to develop a more descriptive product to help the elderly in their daily life or on their autonomous trips to other cities in the country.

“We need to develop mobile phone technology that explains things to seniors and makes the world more intelligible to them. This is strategically our greatest challenge for this year”, reveals Filipe, who adds that they are already working with the Alenquer City Council in this regard and are in conversation with other municipalities, such as Nazaré, Matosinhos, Vila do Conde, Lourinhã, Faro , Loulé and Cascais, and other space management entities, such as Allegro Shopping Centers, Super Bock Arena and Nova SBE.

Vodafone is another partner that launched the challenge of creating an inclusive store to IKI Tecnologies, with guidance from the metro or other transport to the store space and integration of various technologies within the store. The purpose will then be to replicate the concept in all Vodafone stores in the country.

Finally, the creation of iKi-LAB will be another of Iki Technologies’ bets in 2020. This will be a place where the team will test its new solutions based on biomarkers (equipment that indicate the presence and severity of diseases), for instance the Electroencephalography (EEG), which will help to improve the voice triggers implemented in the field. “This design is fundamental for the continuation and improvement of the informational ecosystem that we build for people with visual impairments”, explains Filipe. “This is what is going to move us this year: we are going to focus on corporate and develop as many areas as possible”, he concludes.