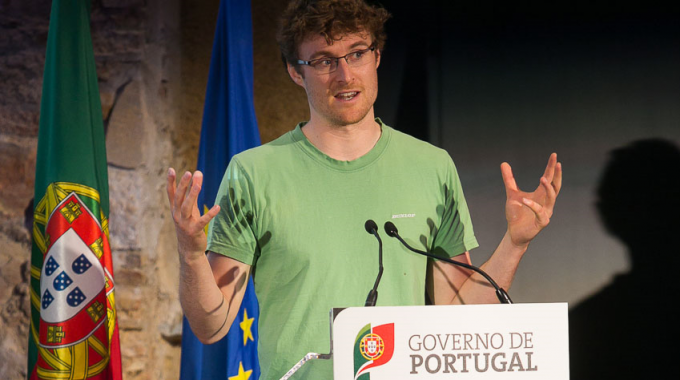 The Web Summit is a global conference based in Dublin that promotes a series of meetings around the world, but whose main event is the annual Web Summit, which has been held in Dublin since 2010, the year it emerged. This initiative has grown from 500 participating local technology companies, which attended the event in 2010, to 22,000 participants from around the world in 2014.

In just four years, the Web Summit has become one of the most influential events worldwide, and in 2015 in Dublin, from 3 to 5 November, it will feature more than 500 speakers, 2000 startups, 1000 experienced investors and 800 of best technology and innovation journalists.

Portugal entered the map of this conference in 2012, when the winner of the startups competition was the Portuguese company Seedrs, a crowdfunding platform (crowdfunding) led by Carlos Silva that won against 19 other competing companies. In 2014, the winner was Codacy, a company that provides a programming code analysis and monitoring platform, which operates in several languages ​​and can be adjusted to different needs, which has passed the 199 competing companies.

In 2016 the biggest international technology conference comes to Lisbon and wants to stay for at least three years. LISPOLIS, as a strategic partner of several companies and entities and with a strong presence in the Portuguese entrepreneurial environment, wanted to know more about this change and spoke with Paddy Cosgrave, CEO of Web Summit.

Below is the full interview, in its original language (English).

LISPOLIS: Do you still remember Seedrs , winner in 2012?

Paddy Cosgrave: I do. As I remember, they had just won approval from the Financial Services Authority for their model. They were in the early stages of their journey, and it’s been just great to watch them grow – expanding into the US and the like – as we’ve grown ourselves.

LISPOLIS: Was Codacy’s victory in 2014 important on bringing Lisbon to your radar?

Paddy Cosgrave: We have always had a steady stream of Portuguese startups at Web Summit but it would be fair to say that Codacy helped bring the growing startup scene in Lisbon on the map. Lisbon is rising fast up the ladder as a place for innovation and it is a great place for Web Summit to be located. It’s almost too perfect: from the thriving startup community, the transport and hotel infrastructure to our new state-of-the-art home. When I went to a Startup Lisboa event when we were putting pen to paper on the deal, I just couldn’t get over the buzz and excitement in the city. It’s just great.

LISPOLIS: What surprised you the most in Codacy?

Paddy Cosgrave: Their growth. I knew they had a great product – that’s why they won PITCH. To see the Codacy guys return to Web Summit as a START startup with thousands of users in almost 2,000 cities worldwide is incredibly gratifying.

LISPOLIS: What other Portuguese start-ups have caught your attention?

Paddy Cosgrave: We’ve actually got four great Portuguese startups taking part in PITCH this year. Ioqr and Facestore are competing in the ALPHA category; Cuckuu and B-Guest in the BETA category.

I really hope they enjoy themselves. They’re pitching in their ‘home conference’ now.

LISPOLIS: What do you like the most in the Portuguese entrepreneurship environment?

Paddy Cosgrave: You guys don’t hang around and wait for anyone do it for you. It sort of reminds me of the Irish entrepreneurship environment. Both countries have been through some tough times over the last 5 years or so, and both are being rejuvenated by a wave of young people who aren’t afraid to try and build and create..

LISPOLIS: How big will be the impact of 3 years of Web Summit in Portugal?

Paddy Cosgrave: We like to think we’ve made a difference to Irish and international startups over the last five years in Dublin. Forty of our Web Summit startups from 2014 have raised $40 billion; Uber raised their first major round of funding in Dublin. Around our HQ, we like to say that the move to Lisbon is our next chapter. I’m confident it will include similar stories.

LISPOLIS: Did other countries get jealous of your decision?

Paddy Cosgrave: You’re going to get me in trouble here! We’ve been open about the fact that we made the right decision for us. The other countries we had been speaking with all respected that.

LISPOLIS: What can you tell us about Web Summit 2016?

Paddy Cosgrave: Web Summit is something we’ve been working on for some time. In fact, we’ve actually started some work on 2017 already. What I can say is that we’ve already booked dozens of top speakers, and many thousands of people have already signed up for our 2 for 1 offer. That level of interest in an event still more than a year away is unprecedented for us.

LISPOLIS: Why should people go to Web Summit 2016 in Lisbon?

Paddy Cosgrave: Whether it’s around our HQ or in Lisbon itself, I just feel such excitement for our move. Web Summit is already the most influential and important startup event in the world and in 2016 we are determined to deliver even better speakers and even better networking opportunities for our attendees. This is the start of something big. It’s your chance to get in on the ground floor and be there with us from the start

LISPOLIS: How many people have registered so far to Web Summit 2016?

Paddy Cosgrave: Many thousand have already signed up for our 2 for 1 offer. That is an amazing reaction.