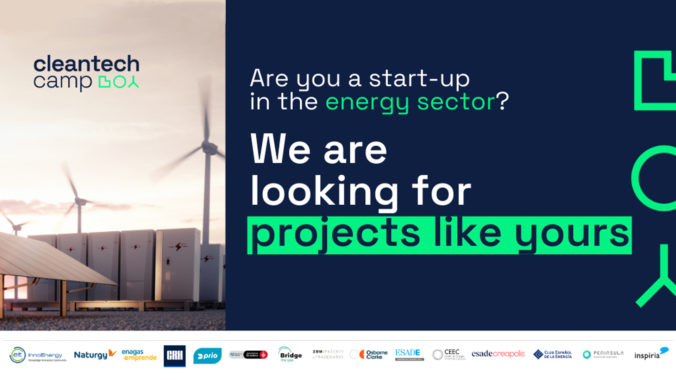 EIT InnoEnergy, PRIO, Naturgy, Enagás Emprende and CRH promote the 6th edition of Cleantech Camp, which has applications open until March 28 for startups with clean energy projects from all over Europe.

Cleantech Camp is a program that aims to accelerate the energy transition in Europe and intends to award 30 thousand euros in prizes and invest in pilot financing with industrial partners. This initiative seeks start-ups and Portuguese projects in the areas of artificial intelligence and IoT, smart cities, renewable energy, mobility and blockchain, among others that can make a difference in the mission to accelerate the energy transition.

After a selection process, up to 15 start-ups from different European countries will be chosen who will be able to participate, between the months of April and July, in the program organized by EIT InnoEnergy, PRIO, Naturgy, Enagás Emprende and CRH, which has the collaboration from Barcelona Ativa as a local partner, as well as Bridge the Gap, Osborne & Clarke and ZBM Patents & Trademarks, who will contribute with their knowledge in different areas, which will be transmitted to entrepreneurs through training sessions.

About Cleantech Camp
Since the first edition, Cleantech Camp has been committed to promoting open innovation among the program’s organizing companies and participating start-ups, with the aim of generating a knowledge-sharing ecosystem. In this sense, the program contributes 20,000 euros to the winning project and 5,000 euros to the second and third prizes, which will be awarded on September 16th.

In addition, the 15 selected projects must present to PRIO, Naturgy, Enagás Emprende and CRH a first draft for the development of a pilot. These companies will select among the proposals received a project, which will be worked on together during the program. At the end of the edition, each company will decide whether to go ahead with the selected pilot and finance its production, with global economic contributions that could reach 120.000 euros.

Cleantech Camp has become a reference program in recent years for entrepreneurs across Europe who develop clean energy projects. In previous editions, approximately 200 project applications were received to participate in the program. This year, Cleantech Camp intends to continue receiving more projects and proposals focused on solutions in the areas of artificial intelligence and IoT, energy efficiency, smart cities, renewable energy, sustainable mobility, smart grids or cybersecurity and blockchain in the area of ​​energy, with potential to become a reality in the market.

More information and applications at http://www.cleantechcamp.com/